It’s hard to hear or read the news of the world without seeing the word Russians. Put aside your politics for a few minutes, and admit it. There are some very smart people in Russia. It is not a country of dullards. So, I perked up last year when VEB, a Russian government owned bank, announced that it was building a project management tool using blockchain technology.

According to VEB chairperson, Sergey Gorkov, as quoted on Coin Telegraph: “When we started to think about how to manage projects efficiently, we realized that there is no platform. We realized that the Blockchain is a good fundamental and qualitative platform for the future.”

Absolutely stunning news! I’ve been fascinated by blockchain and how it might be applied to project management for several years. Could blockchain technology improve project success?

What is blockchain technology?

Before I go further, let me explain a little about blockchain technology – for those who are unfamiliar with the concept, and can’t quite figure out the Wikipedia definition, Blockchain is the technology that Bitcoin (a cryptocurrency) is built on. Blockchain is a highly technical way of linking electronic pieces of data so that the data are preserved and less vulnerable to manipulation. It is a way of preserving digital assets.

There are some pretty smart people who believe that projects contain a substantial number of important digital assets. But what are they and which ones are important? I’ve been wrestling with this for years.

What are a project’s digital assets?

Suppose we rethink projects as a series of promises (even if not communicated as a promise) to deliver something of value. Here are some examples:

In an online world, do these promises to deliver something of value represent digital assets? Suppose we set up these pieces of work as smart contracts?

What are smart contracts?

For those unfamiliar with smart contracts, let me explain. They are, in part, an effort to remove the middleman (typically a lawyer) and automate the exchange of goods or services. The thinking is that the smart computer can take over what a middleman would have done by hand.

So, thinking about project work from this standpoint, your project plan becomes a series of smart contracts that are executed, and after each contract is closed, payment can be automatically made.

How does blockchain come in?

If the project activities are entered into the blockchain as smart contracts, users can quickly spot when, for example, a steel delivery is going to be delayed. And when the steel is delivered, the system automatically pays the steel vendor. Weather delays can be accounted for more easily. The software can easily adjust for delays, as well as those activities that are delivered ahead of schedule. Maybe that would happen more frequently?

What if we could break down projects into activities that were entered into #blockchain as smart contracts? Click To Tweet

In the Bitcoin world, it is easier to validate that a transaction has occurred. In the project world, at least for now, I believe we need to consider the need for security and quality audits before payments are released.

Once activities have been completed and payment has been released, project cost reports are immediately updated, providing a much more reliable picture of the project, as it stands. This step of having a quality manager validate the blockchain to release payment can also be combined with a security audit.

And, when project changes need to occur, these changes would be handled within the blockchain – ensuring that everyone is on board.

What are the limitations that must be considered?

Blockchain technology is additive. There is no way to go back into the chain of transactions and delete something. If we are going to move to blockchain, we need to be careful about the data that we enter into the tool. While blockchain validates the data, it doesn’t validate the quality of the data. Garbage in… Garbage out… And with scalability increasingly recognized as a blockchain limitation, there is no reason to load up the blockchain tool with insignificant conversations, such as those that might be handled in Slack, or some other chat tool.

I’ve said for years that all of the emailed and chat communications may come back to haunt us. We should pay attention to the science of motivation, and use regular and strategic meetings to build better relationships between the actively engaged project team. I’m not putting out a call for more meetings. I’m advocating better meetings, where problems are solved, promises are made, information is constructively shared, and decisions are recorded in the blockchain tool.

When we read daily of hacking attempts or spying efforts on credit card companies, hospitals, transportation infrastructure, and credit reporting agencies, it’s hard to have confidence in the technologies that undergird our society. We’ve already seen multiple Bitcoin hacks, and debate continues about whether they were inside jobs or true security compromises. And, this week we learned about the processor problems that impact just about everything that connects to the Internet. Clearly, the term cybersecurity is an oxymoron. And yet, don’t we have to focus on improving the security around our tools?

While blockchain may be the most secure technology to date, it relies on individuals to safeguard their keys. What happens when these “private keys” are left lying under desk blotters, or taped to monitors in offices around the world? When private keys guard the money that we, as individuals make, perhaps our interest in guarding those keys is greater than it is otherwise?

We operate in a world where much of the first world population still struggles with email, online calendars, and to-do lists. And to further complicate matters, few of us live in a world where we spend our lives in one browser window tab for the entire day. We are back and forth between phones, laptops, desktops, and tablets. And then, we juggle multiple projects, operational demands, personal needs, and more than the occasional crisis.

At the end of the day, most of us just want to know what we should do next. And that may be as simple as remembering to pick up the milk on the way home, or move some funds to cover the mortgage or rent payment.

If some brilliant minds got together and built a project management tool that incorporates some elements of blockchain technology and perhaps some artificial intelligence, who would use it? And why would they use it? Human nature may be the supreme factor governing usage. Many of the apps that people use today are habit forming. Maybe we should think about building in some addictiveness to something that has real value to our organizations and the people in them.

For larger entities, this kind of solution could be run in a permissioned blockchain, which offers an improved level of security over a shared database. There are clearly many questions that need to be answered. Some questions center on the level of transparency between disparate groups of stakeholders, working on the same effort. This is particularly true in public-private partnerships, international projects, or legal projects, where the work is being shared by multiple legal entities.

I see potential for a blockchain tool with customized dashboards, specific to the needs of the different players. The Smart Projex approach yields more reliable and comparable data analytics across an entire project portfolio, and the addition of smart contracts would enhance the quality of that data.

I see huge potential for increasing the trust between disparate groups of project stakeholders. I see this to be particularly true in large projects that span countries or organizations. I see this trust building with the ability to manage discrete blocks of work, through smart contracts that are properly scoped, with a quality manager assigned. When teams can trust the data that are reported to management and to other stakeholders, it will inspire confidence in the tool, and in each other.

If the intersection of blockchain and project management interests you, I’d love to chat. I’m at a crossroads with Smart Projex, and assessing my next steps. What about you? Connect with me on LinkedIn here or schedule a call. Maybe I’ll feature you in an upcoming blog or a white paper about how to make this happen.

In her new book, Suzanne S. Davenport argues that the technologies and tools that got us where we are today won’t get us where we want to be in the future. She offers a vision of how we could transform project and work management to improve profits. 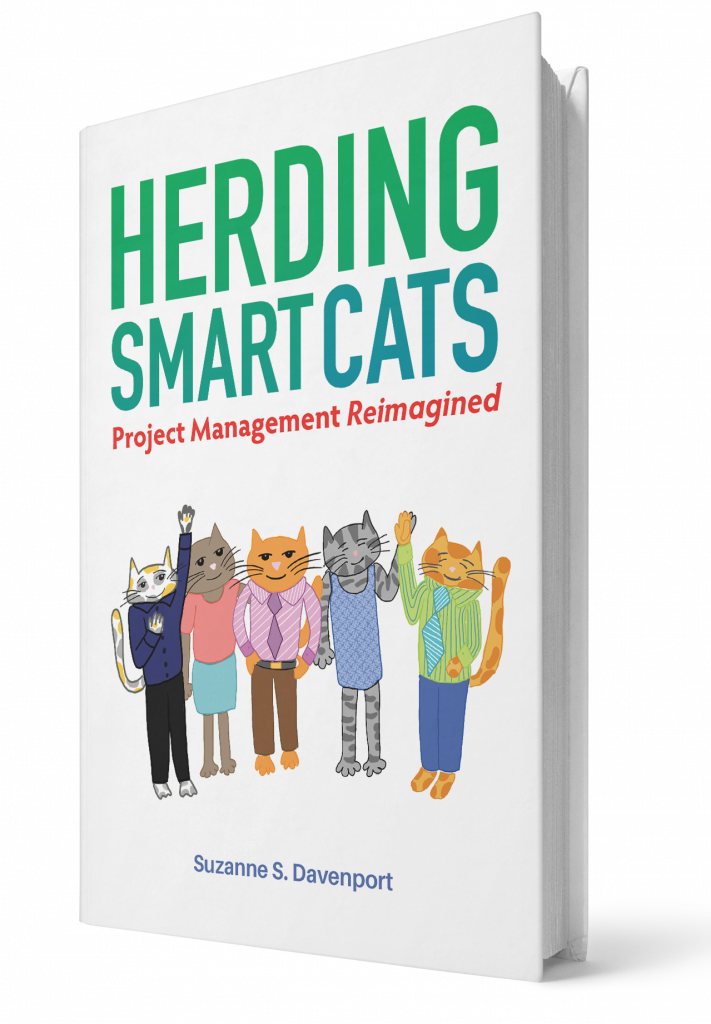 Did you know I wrote the book on project management?